Our whimsical mascot Guy Kistka is celebrating the Feast of Saint Valentine and spreading the love of pysanky. 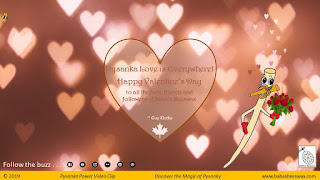 Every February 14 candy, flowers and gifts are exchanged between loved ones, all in the name of St. Valentine. But who is this mysterious saint, and where did these traditions come from?

According to history dot com the story of this saint is shrouded in mystery. We do know that February has long been celebrated as a month of romance, and that St. Valentine’s Day, as we know it today, contains vestiges of both Christian and ancient pagan tradition. Does this sound familiar? Sounds like valentines and pysanky have something in common.

At least three different saints named Valentine or Valentinus, all of whom were martyred, have been recognized. Like pysanky legends, there are legends surrounding Valentine.

One legend contends that Valentine was a priest who served during the third century in Rome. When Emperor Claudius II decided that single men made better soldiers than those with wives and families, he outlawed marriage for young men. Valentine, realizing the injustice of the decree, defied Claudius and continued to perform marriages for young lovers in secret. When Valentine’s actions were discovered, Claudius ordered that he be put to death.

Other stories suggest that Valentine may have been killed for attempting to help Christians escape harsh Roman prisons. According to one legend, an imprisoned Valentine actually sent the first “valentine” greeting himself after he fell in love with a young girl–possibly his jailor’s daughter–who visited him during his confinement. Before his death, it is alleged that he wrote her a letter signed “From your Valentine,” an expression that is still in use today. Although the truth behind the Valentine legends is murky, the stories all emphasize his appeal as a sympathetic, heroic and–most importantly–romantic figure. By the Middle Ages, perhaps thanks to this reputation, Valentine would become one of the most popular saints in England and France.

Visit our website to discover the magic of pysanky kits, supplies and books published by Baba’s Beeswax:
http://www.babasbeeswax.com

If you like what you see, comment below. If you don't please let us know how we can make improvements. We value all feedback.


Posted by Baba's Beeswax | Discover the Magic of Pysanky at 19:32 No comments:

Baba's Beeswax | Discover the Magic of Pysanky
Richmond, BC, Canada
Everything you need to make beautiful pysanky Ukrainian Easter eggs the traditional way—from kits and supplies to books and workshops. Making a pysanka is easy, fun and affordable/